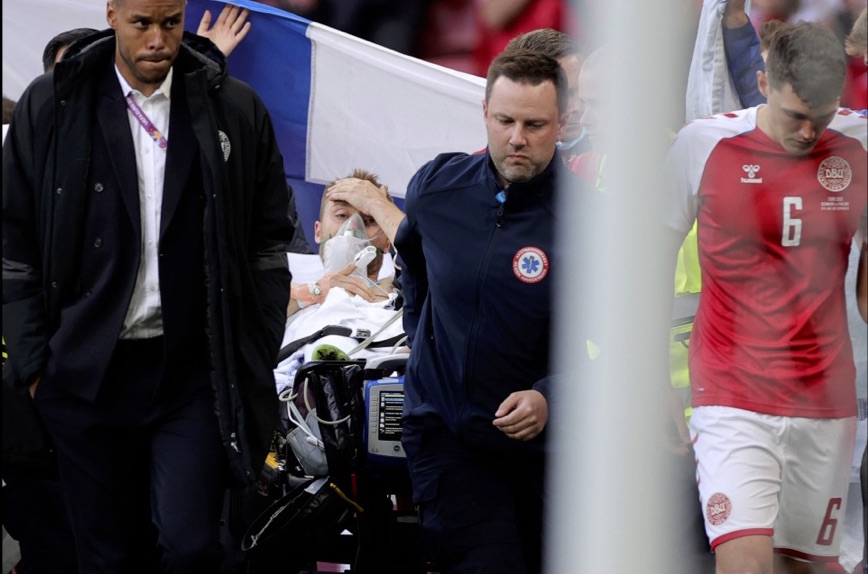 CHRISTIAN ERIKSEN is reported to have told Denmark’s players that he wanted them to finish their game against Finland on Saturday evening, after collapsing during the first half.

Following a 1-1 draw for Wales earlier in the day, Eriksen was given emergency treatment on the pitch in the Group B game between Denmark and Finland.

His team-mates decided they wanted to finish the game on Saturday night after speaking to Eriksen and, after news had come through that the Inter Milan star was stable and awake, the game resumed and Finland went on to secure a 1-0 victory.

It was later revealed that Eriksen had swallowed his tongue and suffered a cardiac arrest.

Danish captain Simon Kjaer was quick to react and pulled his tongue out, before starting emergency CPR. Medical staff continued to give Eriksen CPR, after his heartbeat had slowed to a dangerously low rate, and he was carried away on a stretcher wearing an oxygen mask and with his eyes open.

After receiving treatment, Eriksen was awake and responsive. He was then taken to hospital and the match was suspended for 90 minutes before resuming.

Denmark’s team doctor Morten Boesen is quoted by Danish media as saying: “We felt the pulse, but pretty quickly the picture changed and then we started life-saving heart treatment. He was gone. We did cardiac resuscitation, it was a cardiac arrest.

“How close were we to losing him? I don’t know, but we got him back after one defib so that’s quite fast. We got Christian back, he spoke to me before he was taken to the hospital.”

Inter Milan CEO Giussepe Marotta revealed on Saturday night that Eriksen had made contact with his Inter team-mates.

In Saturday’s other Group B game, Belgium ran out comfortable 3-0 winners against Russia, with Romelu Lukaku scoring twice.

WALES opened their Euro 2020 campaign with a 1-1 draw against Switzerland in Baku.

With Gareth Bale captaining the side, Wales struggled against Switzerland for much of the game, but they were managed to rescue a draw thanks to Kieffer Moore’s second half equaliser.

Robert Page’s men started well – and a great first half effort from Moore was kept out by a brilliant save. Moore needed treatment soon after following an aerial clash with Kevin Mbabu, and returned to the action sporting a patriotic red head bandage.

Switzerland dominated after that and created several good chances. They were denied in the first half by some stern Welsh defending, but they took the lead early in the second half when Breel Embolo headed in Xherdan Shaqiri’s corner.

Moore equalised from a 74th minute corner, but Switzerland were denied late on as they had a goal ruled out by VAR for offside and Wales keeper Danny Ward made some crucial saves.

After Italy’s 3-0 win against Turkey on Friday, Wales share second spot with Switzerland in Group A, with Wales’ next meeting a crucial clash with Turkey on Wednesday.

FOOTBALL took a back seat as the first Group B game of Euro 2020 was suspended before half-time after Christian Eriksen received emergency treatment on the pitch.

Denmark had been the better team in the first half but, after play resumed, it was Finland who went on to secure victory in Copenhagen with a second half winner from Joel Pohjanpalo.

Playing in their first major tournament, the Finns held on for the win after Pierre-Emile Hojbjerg’s poor penalty was saved.

Belgium’s win in the late game leaves Finland in second place in Group B after one game, three points ahead of Denmark and Russia.

ROMELU LUKAKU scored twice as a Belgium side without star midfielder Kevin De Bruyne strolled to victory against Russia in St Petersburg.

Lukaku broke the deadlock in the 10th minute, before running to a camera to say “I love you Chris” in support of his Inter Milan team-mate Christian Eriksen, following the Danish striker’s collapse on the pitch in the Denmark v Finland game.

Thomas Meunier doubled Belgium’s lead before half-time and, after Eden Hazard came on as a substitute, Lukaku completed a comfortable win with his second goal late on.