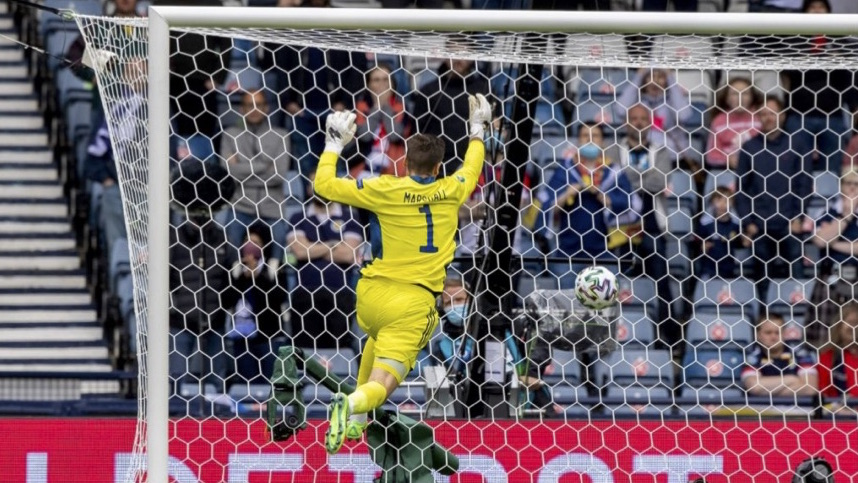 SCOTLAND started their first European Championships this century with a disappointing defeat against Euro 96 runners-up Czech Republic that leaves them bottom of Group D.

Goals either side of half-time from Patrik Schick – including an incredible srike from just inside Scotland’s half – condemned Scotland to a 2-0 defeat in their first game.

The result means that Scotland are below Croatia on goal difference after England’s 1-0 win against the 2018 World Cup finalists on Sunday.

SCOTLAND had high hopes of making a positive start to their Euro 2020 campaign, but they slumped to defeat in their opening Group D game at Hampden Park.

After a handful of bright moments for Scotland in the first half, it was the visitors who took the lead in the 42nd minute. Grant Hanley headed a corner clear, but Vladimir Coufal crossed back into the box and Patrik Schick got between between Liam Cooper and Hanley to head home.

There was a frantic start to the second half, with both sides creating chances. David Marshall twice prevented a second Czech goal, then Scotland went close when Jack Hendry’s effort hit the top of the crossbar – and a Tomas Kalas sliced clearance looped over Czech keeper Tomas Vaclik, whose agility prevented an equaliser.

Czech Republic doubled their lead in the 52nd minute. Hendry’s shot was blocked and created an opportunity for Schick. Spotting Marshall off his line, he fired a brilliant effort from just inside the Scotland half over the keeper’s head and into the net for what is sure to be one of the goals of the tournament. It also broke the record for longest range goal at the European Championships (49.7 yards).

Scotland created a few chances after that, but Czech Republic held on for victory.

Next up for Scotland is Friday’s game against England at Wembley.

SLOVAKIA, one of the tournament’s outsiders, earned a surprise win against 10-man Poland in their Group E clash in St Petersburg.

They took the lead in the 18th minute after some great skill from Robert Mak, who nutmegged a defender before his deflected shot hit the post and rebounded into the goal off Poland goalkeeper Wojciech Szczesny’s arm.

Karol Linetty equalised for Poland early in the second half but, following the 62nd-minute dismissal of Poland midfielder Grzegorz Krychowiak for a second booking, Milan Skriniar’s shot on the turn secured all three points for Slovakia.

SPAIN failed to convert their dominance into victory as they were held to a draw by a resolute Swedish side in Seville.

The home side completely dominated the first half, but almost found themselves a goal down just before the break.

In Sweden’s only chance of the half, Alexander Isak – who plays his club football in Spain with Real Sociedad – went through on goal, but miscued his initial shot. His follow up effort hit Marcos Llorente and rebounded onto the post.

Sweden went close to taking the lead on 62 minutes. Following some trickery in the box by Isak, he crossed to the far post, but Marcus Berg was unable to convert the chance under pressure from a defender.

Alvaro Morata almost snatched a late winner for Spain from six yards but his header was saved.

Sweden survived another late scare, but held out to secure a point.