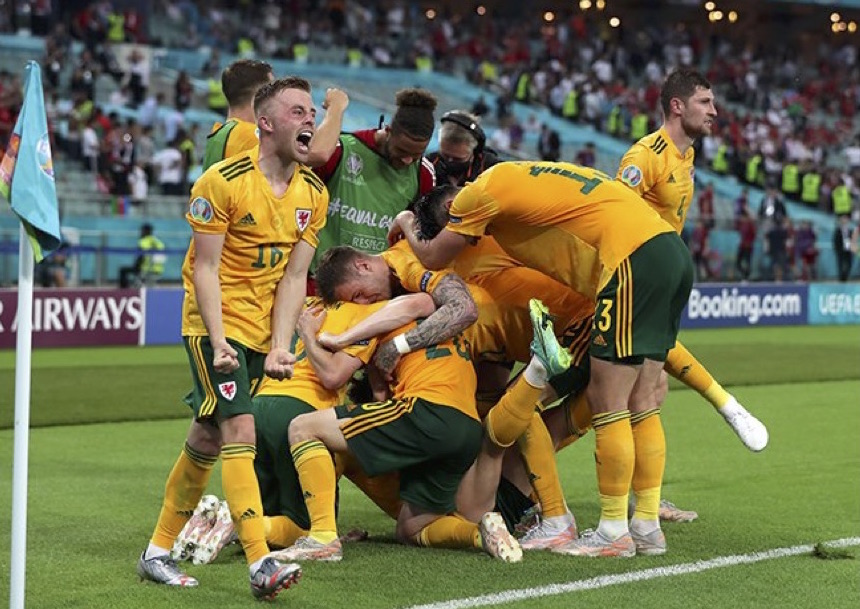 GARETH BALE set up both goals and missed a penalty as Wales secured a 2-0 win against Turkey to all but secure their place in the Euro 2020 knockout stage.

Wales were temporarily on top of Group A with four points after Wednesday’s victory, before Italy thumped Switzerland for their second 3-0 win in two games.

Earlier in the day, Russia bounced back from their 3-0 defeat against Belgium with a 1-0 win against Finland in Group B.

RUSSIA moved up to second place in Group B on goal difference after edging out Finland in St Petersburg, thanks to a moment of high quality just before half-time.

Aleksey Miranchuk played a one-two with Artem Dzyuba in the box in first half stoppage time and took an early shot with his left foot that sent the ball into the far corner, with the first effort on target for either side. It was the longest wait for an attempt on target so far at the tournament.

Finland thought they had taken the lead in the third minute when Joel Pohjanpalo, the goalscorer in his side’s 1-0 win against Denmark, headed home from a great cross after Russia had lost the ball playing out from the back – but the goal was ruled out, with Pohjanpalo a fraction offside as the ball was crossed in from the right.

Prior to the game’s only goal, Russia had gone close late in the half when Daler Kuzyaev found Vyacheslav Karavaev at the far post. Jere Uronen’s brilliant block denied him and Karavaev collided with the post, accidentally catching Uronen in the face with his boot.

Apart from their disallowed goal, Finland did not cause too many problems for Russia, who had chances to double their lead after the break.

WALES secured a victory that could already be enough for them to progress to the Euro 2020 knockout rounds, regardless of what happens in their next Group A game against Italy.

Aaron Ramsey broke the deadlock late in the first half after a superb ball over the Turkey defence from Gareth Bale, and Bale made up for a penalty miss to set up the second goal five minutes into second half stoppage time for Connor Roberts.

Wales were deserved winners in front of more than 30,000 fans in Baku, but missed several chances in an entertaining first half.

They took the lead in the 42nd minute. Bale spotted Ramsey’s run and played a brilliant lofted pass to him, and Ramsey controlled it well before slotting home.

Turkey pressed hard in search of an equaliser, but Wales squandered a great opportunity to add to their lead when captain Bale was tripped just inside the area, only to fire his penalty over the bar.

The Wales defence stood firm against Turkey’s attacks, with a superb defensive tackle from Ramsey, and keeper Danny Ward making a great save to deny Merih Demiral.

It was all over when Roberts struck from a late Wales corner following Bale’s jinking run along the byeline and pass.

ITALY are the first team to secure their place in the knockout stage of Euro 2020 with another impressive 3-0 win and three superb goals.

Giorgio Chiellini had a goal ruled out early on before limping off with a hamstring problem, but it wasn’t long before Roberto Mancini’s side were in front.

Locatelli sent a superb long pass out to Domenico Berardi on the right wing, then sprinted into the box to convert Berardi’s cut back.

Italy outclassed Switzerland and Locatelli’s strike from the edge of the area doubled the lead early in the second half, before Immobile finished off a great night with a long range strike late on.

Italy have not conceded a goal in 10 games and have a chance to extend their impressive defensive record to more than 1,000 minutes without conceding when they take on Wales in the last of their three Group A games.