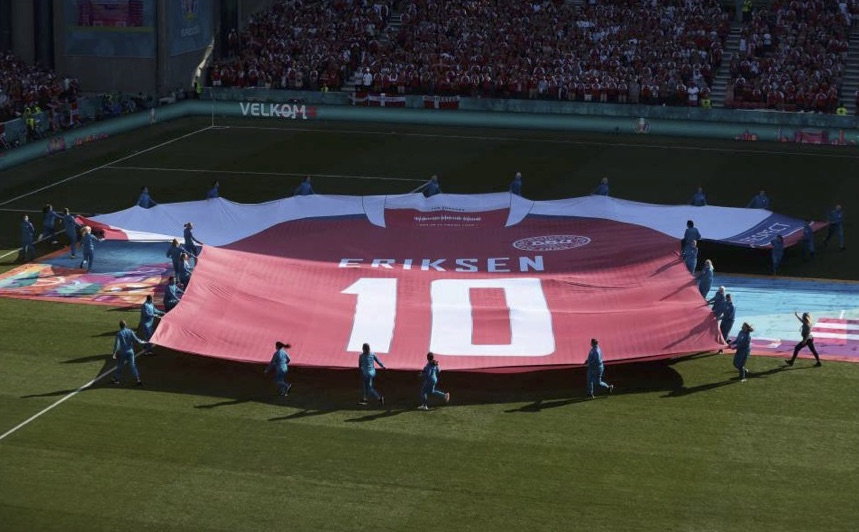 DENMARK and Belgium paid tribute to Christian Eriksen before and during their Group B clash in Copenhagen on Thursday.

A giant ‘ERIKSEN 10’ Denmark shirt was displayed on the pitch before kick-off and, 10 minutes into the game, play was stopped so that players, officials and fans could join together in applause to show their support of the Inter Milan star.

Eriksen suffered a cardiac arrest in Denmark’s opening Group B game against Finland on Saturday but appears to be making a good recovery in hospital.

The 29-year-old will be fitted with a heart-starting ICD (implantable cardioverter defibrillator) device following his collapse on the pitch.

Eriksen says he is “fine under the circumstances”.

The Danish players were able to conjure up another moment of tribute for Eriksen as they took the lead with a Yussuf Poulsen goal in the second minute, but Belgium hit back to win 2-1 and qualify for the last 16.

Ukraine beat North Macedonia 2-1 in Group C earlier in the day, while the Netherlands won 2-0 against Austria in the same group to secure qualification to the last 16 and top spot in the group, with a result that means North Macedonia cannot progress to the knockout stage.

UKRAINE bounced back after their 3-2 defeat against the Netherlands with victory against North Macedonia in an entertaining clash in Bucharest.

They took the lead in the 28th minute when captain Andriy Yarmolenko capitalised on some poor defending from a corner, and Yarmolenko set up Roman Yaremchuk, who slotted into the bottom corner five minutes later.

Leeds United’s Ezgjan Alioski pulled a goal back for North Macedonia in the 57th minute when he followed up to score after his penalty was blocked by the keeper.

BELGIUM recovered from going a goal down in the first two minutes to win the game and book their place in the last 16.

Denmark came racing out of the blocks and from one of their early chances, Yussuf Poulsen gave them the lead following a defensive lapse.

Kevin De Bruyne was introduced at the start of the second half and was involved in the equaliser in the 54th minute, as his pass set up Thorgan Hazard to score, then finished off a great move by firing in a stunning winner on 70 minutes.

Martin Braithwaite went close for Denmark but his header found the top of the bar, leaving the Danes without a point after two games.

A DOMINANT Netherlands made it two wins in two games to qualify for the last 16 as group winners.

Stefan de Vrij had appeals for a Netherlands penalty waved away, before Denzel Dumfries was caught by David Alaba and, after a VAR check, Memphis Depay stepped up to slot the penalty into the bottom left corner in the 11th minute.

It was 2-0 in the 66th minute. Depay’s through ball found substitute Donyell Malen and he went through on goal, before squaring for Dumfries to tap in.