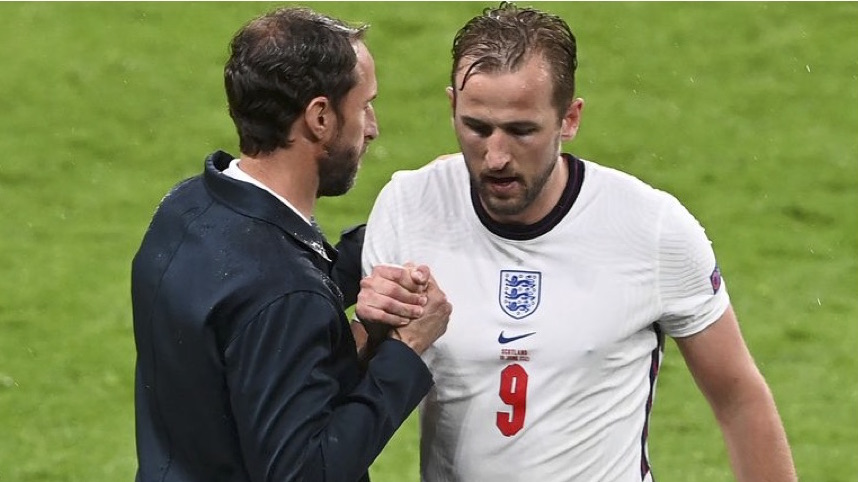 ENGLAND were frustrated by an impressive Scotland display in a 0-0 draw at Wembley on Friday evening, but the point means they will win Group D if they beat Czech Republic on Tuesday.

It was a lacklustre performance from England, but Scotland deserved the draw.

It was the first 0-0 draw between the two nations at Wembley and only the fourth goalless draw in the history of the fixture, in a repeat of the scoreline when the sides first met in 1872.

Croatia’s 1-1 draw against Czech Republic earlier in the day means England and Czech Republic have four points each, with Gareth Southgate’s men in second place in Group D on goal difference.

England will guarantee their place in the last 16 if they avoid defeat in their third Group D game against Czech Republic.

Scotland and Croatia, who have a point apiece, meet each other on Tuesday, with Croatia currently in third place in the group on goal difference.

In Friday’s other game, Sweden beat Slovakia 1-0 in Group E, courtesy of a second half penalty.

ENGLAND and Scotland played out a goalless draw in front of 22,500 fans at Wembley – but both sides squandered good opportunities to claim all three points.

Despite a below par England performance, they carved out two of the game’s best chances, with John Stones heading Mason Mount’s corner against the post early on, and Mount having a shot saved.

But Scotland created some good opportunities of their own. Jordan Pickford’s save kept out Stephen O’Donnell’s shot and Che Adams went close, while a Lyndon Dykes effort was blocked by Reece James on the goal line – although it was not clear from replays if Dykes’ effort was on target.

Southgate introduced Jack Grealish in the second half, but surprised many England fans when Harry Kane was substituted after another indifferent performance by the striker’s high standards.

England had penalty appeals waved away after Andy Robertson’s challenge on Raheem Sterling, while Scotland’s stubborn defence kept their clean sheet in tact in a goalmouth scramble late on.

CZECH REPUBLIC finished the day as Group D leaders as they held on for a draw against Croatia at Hampden Park.

The Czechs opened the scoring thanks to Patrik Schick’s 37th minute penalty, after referee Carlos del Cerro Grande checked the VAR monitor and ruled that Dejan Lovren had fouled Schick, with his outstretched arm causing the striker to suffer a bloody nose.

Schick’s penalty added to his two goals against Scotland and makes him the tournament’s top goalscorer.

Ante Rebic missed the target from 10 yards, but Croatia did find an equaliser thanks to Ivan Perisic’s superb strike two minutes into the second half.

SWEDEN went top of Group E and took a giant step towards the last 16 with victory against Slovakia in St Petersburg.

After their 0-0 draw against Spain, a second half penalty and another clean sheet saw Sweden overtake Slovakia at the top of the group with four points.

After a low key first half, Sweden stepped up a gear after the break, with star man Alexander Isak causing problems for the Slovakia defence.

They broke the deadlock in the 77th minute. Substitute Robin Quaison was fouled by keeper Martin Dubravka and Emil Forsberg converted from the penalty spot.