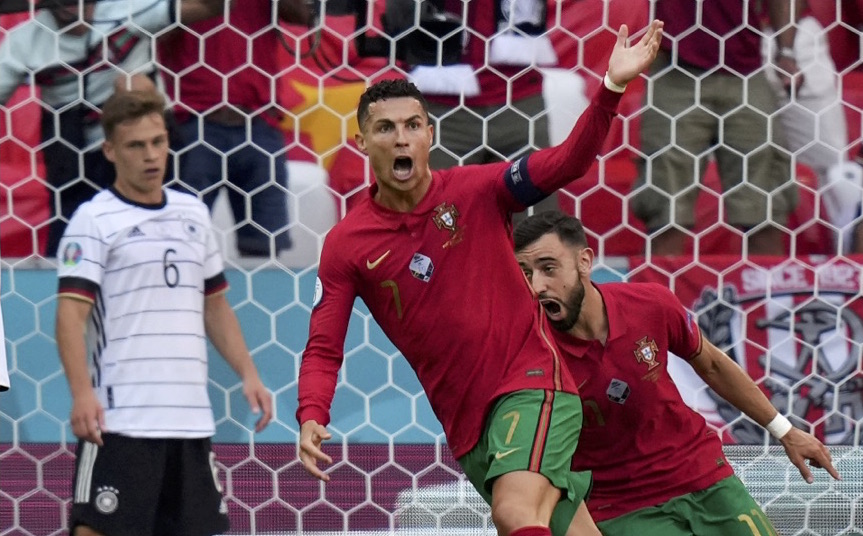 CRISTIANO RONALDO’S goal in Portugal’s 4-2 defeat against Germany on Saturday was his 107th for his country – and means he will equal the record for most international goals scored if he finds the net twice more at Euro 2020.

Ali Daei is the current record holder with 109 goals for Iran, but Ronaldo could surpass that total at this tournament.

Ronaldo has already broken the record for top scorer in Euros history with his three goals so far, taking him to 12 European Championships goals in total across five tournaments. Prior to the start of Euro 2020, he shared the record with Michel Platini, who scored all nine of his Euros goals at the 1994 tournament.

Ronaldo has another chance to extend his Euros goals record and move closer to the all time international goals record when Portugal take on France in their final Group F game on Wednesday.

A win against France would secure Portugal’s place in the knockout rounds and, even if things do not go Portugal’s way on Wednesday, they could still qualify for the knockout stage if they finish third in Group F, with four of the six third placed teams progressing to the last 16.

So Ronaldo will be hoping to inspire his side to at least a draw against France, and that Portugal can extend their stay at Euro 2020 for at least one more game.

If they finish second in Group F, they will face the Group D winners in the round of 16 – which could mean a clash with England at Wembley on June 29.

Ronaldo scored his first international goal in stoppage time when hosts Portugal lost 2-1 against Greece at Euro 2004 in their first group game – and, after converting his penalty in a shootout win against England, he added his second Euro 2004 goal as Portugal beat the Netherlands 2-1 in the semi-finals, before losing 1-0 to Greece in the final.

By the following summer, Ronaldo had extended his international goals tally to nine, with seven in Portugal’s 2006 World Cup qualification campaign – including a brace of goals in a 7-1 win against Russia.

He scored hat-tricks against Northern Ireland and Sweden in World Cup 2014 qualifying and bagged his 50th goal in June 2014, in a 2-1 win at Ghana at the World Cup in Brazil.

His two goals at Euro 2016 took his tally to 61 – and he scored four in a 6-0 win against Andorra in World Cup 2018 qualifying to extend his international goals total to 65.

Ronaldo has so far scored nine international hat-tricks – including two four goal hauls – with 12 of his 107 international goals being scored from the penalty spot.

In addition to his 12 goals at European Championships, he has scored 31 in Euros qualification games and 31 in World Cup qualifying, with seven World Cup goals.

He was joint top scorer on three goals at Euro 2012 and, if he equals the international goals record with two more at Euro 2020, he will join a list of only six players who had scored five or more Euros goals prior to the start of this tournament.

His 12 Euros goals have been scored in 23 appearances.

Only two players have scored more than five goals at a Euros tournament – Platini, with nine in 1994, and Antoine Griezmann, who scored six to win the Euro 2016 Golden Boot.

Even if Ronaldo does not match the 109 international goals record at Euro 2020, he looks certain to break the record at some point this year – and will be hoping to add to his World Cup goals tally in Qatar next year, where he will be looking to break another record.

Along with Germany’s Miroslav Klose, Ronaldo is the joint highest scoring European player in European Championships and World Cups, with 19 goals.