Gareth Southgate – A lesson in how to fail, learn and win 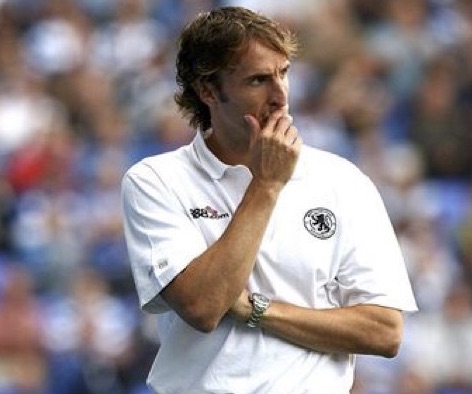 Tuesday’s 2-0 win against Germany at Wembley was 25 years and three days in the making – and seven weeks shy of 15 years since he made his managerial debut.

Those two dates have been a key part of Southgate’s education as a football man. He has failed, learned and won.

In the Euro 96 semi-final against Germany, Terry Venables asked Southgate if he would take a penalty if the shoot out went to sudden death. He said yes. He stepped up, took responsibility and failed.

That day in June 1996 has served Southgate well as a man and a manager. He continues to step up and take responsibility.

And his first competitive game as a manager, in charge of Premier League Middlesbrough in 2006, provided him with another key learning experience.

Southgate had played for three clubs – Crystal Palace, Aston Villa and Middlesbrough – and made more than 100 appearances for all three.

His first pre-season campaign ended in a 0-0 draw against Chievo at the Riverside Stadium.

A week later, it was finally time for Southgate to lead a team as manager in a competitive game, against newly promoted Reading at the Madejski Stadium.

And that is where the current England manager learned an important lesson about game management.

Midway through the first half, Southgate’s plan was working, as Stewart Downing and Yakubu gave the visitors a 2-0 lead in the first 21 minutes.

But three goals in 12 minutes either side of half-time turned the game around and Reading won 3-2.

Southgate learned quickly and in his first home game in charge, Middlesbrough recovered from going 1-0 down to an early goal from Ukraine’s current manager Andriy Shevchenko to win 2-1 against Chelsea, thanks to late strikes from Emanuel Pogatetz and Mark Viduka.

Boro finished 12th in the Premier League, an improvement on the previous season’s 14th place finish under previous manager Steve McClaren, who Southgate replaced after McClaren was given the England manager’s job.

A 13th place finish followed in Southgate’s second season in charge, but Middlesbrough were relegated the following season and he was dismissed.

As he has shown throughout his career, failure is part of learning – and he waited four years for his next managerial role with England’s Under 21s, taking over from Stuart Pearce in August 2013.

Three years of learning and seeing young players progress followed with the Under 21s, before Southgate was put in temporary charge of the England senior side in September 2016.

Southgate oversaw England during the 2018 FIFA World Cup qualifying campaign. A 2-0 win against Malta in his first game in charge was followed by a 0-0 draw with Slovenia, a 3-0 win against Scotland and a 2-2 draw with Spain. Less than two months after being given the role on a temporary basis, Southgate signed a four year contract as England manager.

England reached the 2018 World Cup semi-finals in Southgate’s first tournament in charge – as he gained further kudos as an intelligent thinker and someone who builds good foundations through careful planning and strategy.

There was the added bonus of working with players at senior level who had progressed from the Under 21s during his three years in charge.

Three years on from England’s near miss at a World Cup, Southgate has a better squad at his disposal – highlighted by two excellent wins against Czech Republic and Germany in which Mason Mount did not feature.

Southgate’s tactical awareness and game management are shining through as key strengths. England won their opening Euros game for the first time, have gained revenge on Croatia and Germany, have won a knockout round game in 90 minutes for the first time, and have not conceded a goal in their four games so far.

The only previous tournament in which England kept four clean sheets in their first four games was also the only time they have won a major tournament.

A student of the game

Planning, strategy and good values are part of Southgate’s make up as a manager and England have the kind of togetherness that helped previous Euros winners Denmark, Greece and Portugal secure unlikely triumphs.

That thinking was highlighted in the win against Germany. Two Jordan Pickford saves and a mistake from Raheem Sterling that led to Muller’s miss was the sum total of Germany’s failed bid for a place in the quarter-finals, with England creating two excellent chances before Sterling and Harry Kane’s late goals.

The two England goals against Germany were also a window into Southgate’s tactical nous.

They stepped up a gear and pulled the trigger with a well worked goal that was set up by Sterling’s bursting run through the middle of three German defenders.

What then followed looked like it had come straight from the training pitch as Sterling passed to Kane then quickly moved into position, before Kane and Jack Grealish combined, Luke Shaw crossed and Sterling pounced for his third goal of the tournament.

Southgate has failed, learned, and is winning.