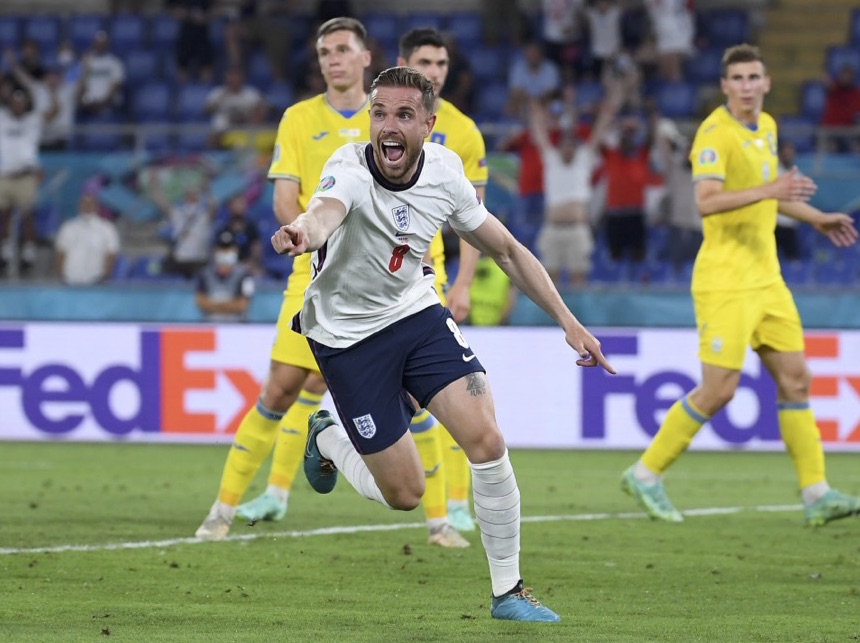 GARETH SOUTHGATE’S England are one game away from their first tournament final for 55 years, after a 4-0 win against Ukraine in Saturday’s quarter-final in Rome.

But confidence in England’s chances of Euro 2020 success runs much deeper than a convincing victory against a nation they were favourites to beat.

Harry Kane scored his second and third goals of the tournament, Harry Maguire and Jordan Henderson both headed their first – with Henderson’s goal his first for England – and Denmark stand in the way of a Wembley final against Italy or Spain on Sunday.

And Southgate’s master plan is paying dividends. His England side’s results are as impressive as his squad’s strength in depth.

There is defensive solidity, giving the attack minded players the freedom to express themselves. That strategy has produced six goals in England’s two knockout games so far.

Back in 2016, when England’s manager was placed in temporary charge following three years with the Under 21s, his team kept clean sheets in his first three games. That set the tone, and Southgate was given a four year contract.

England reached their first tournament semi-final under Southgate three years ago – and are stronger now than they were then.

Saturday’s result saw England secure a seventh clean sheet in a row. In their last 11 games, they have won 10, drawn once (the 0-0 draw against Scotland), kept 10 clean sheets and only conceded one goal. They conceded eight goals in seven World Cup games three years ago.

WEDNESDAY’S semi-final will be Southgate’s 60th match in charge of England. One goal against Denmark will make it an average of exactly two goals a game.

Denmark are likely to provide a sterner test than Ukraine for England at Wembley.

They lost their first two group games, against Finland and Belgium, but beat Russia 4-1 to book their place in the round of 16 and were too good for Wales, as they scored four for a second game in a row. They earned a semi-final spot with a 2-1 win against Czech Republic.

Kane, Raheem Sterling and Denmark’s Kasper Dolberg are the highest scoring players left in the tournament, with three goals each.

WINNERS WILL MEET ITALY OR SPAIN IN FINAL

IN TUESDAY’S first semi-final, Italy will take on Spain.

Italy breezed through their group with three wins, seven goals scored and three clean sheets, but needed extra-time to beat Austria in the last 16, before booking their place in the semi-finals with a 2-1 win against Belgium.

Spain drew their first two group games before beating Slovakia 5-0, followed by a 5-3 extra-time triumph against Croatia in the round of 16 after they had squandered a 3-1 lead in 90 minutes.

They needed penalties to beat Switzerland, but missed two of their first three spot kicks before securing their place in the semi-finals.

KANE CLOSING IN ON GOALS RECORD

Kane and Raheem Sterling are tied with Frank Lampard on three goals for England at a single European Championships tournament.

Only Alan Shearer (5) and Wayne Rooney (4) have scored more goals for England at a Euros tournament.

Most tournament goals for England (players in bold are current England players):

Most goals at one tournament:

Most goals at one Euros tournament:

SEMI-FINALS (both matches at Wembley)