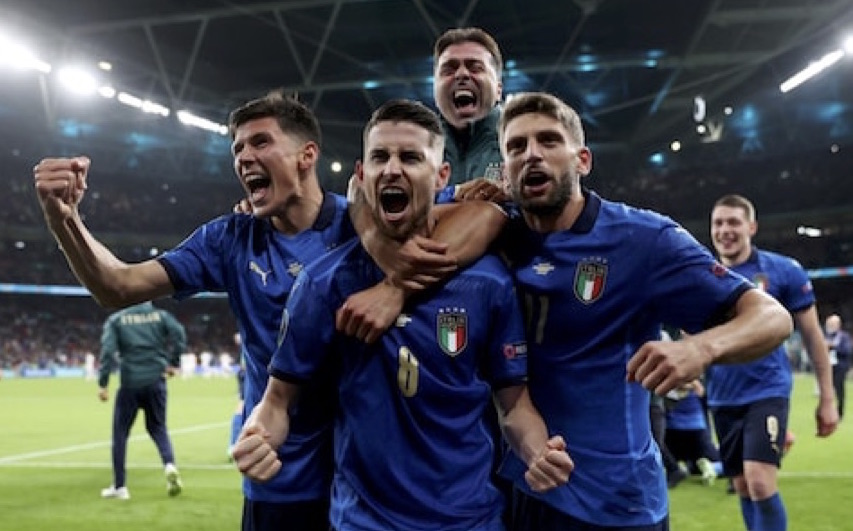 ENGLAND will take on Italy at Wembley in their first tournament final for 55 years on Sunday.

Gareth Southgate has so far led England in two tournaments and has already surpassed his achievement of reaching the World Cup semi-final in 2018 with a Euro 2020 final. Win that game and he will become only the second manager in England’s history to win a tournament, and the first to triumph in the European Championships.

After Italy’s failure to qualify for the World Cup, Roberto Mancini was appointed as their manager in May 2018. His side went through their Euro 2020 qualifying campaign unbeaten and extended that unbeaten run to 33 games on Tuesday with their semi-final win against Spain, which they won in a penalty shoot out.

England won all of their qualifying games apart from a 2-1 defeat at Czech Republic in Prague, after they had beaten their Euro 2020 Group D opponents 5-0 in their first qualifying game back in March 2019, thanks to a Raheem Sterling hat-trick, a Harry Kane penalty and an own goal.

The impressive start continued as England extended their goals tally to 19 in four games with a 5-3 win against Kosovo and, after the defeat against Czech Republic, they won all of their remaining games – 6-0 against Bulgaria, 7-0 against Montenegro and 4-0 against Kosovo.

England topped the group with seven wins and one defeat, 37 goals for – including 12 for Kane, eight for Sterling, four for Ross Barkley, three for Marcus Rashford and two for Jadon Sancho and – and conceded six goals, with five clean sheets.

Czech Republic qualified in second place, finishing six points behind England and four ahead of Kosovo in third place.

Italy made light work of their qualifying group, winning all 10 games in a group that included Finland, Greece, Bosnia and Herzegovina, Armenia and Liechtenstein – scoring 37 goals, conceding just four.

They finished their qualifying campaign with a 9-1 win against Armenia, with seven different scorers on target.

Italy picked up where they left off in qualifying

That was back in November 2019, but when Italy kicked off Euro 2020 in Rome on June 11, they picked up where they had left off with a 3-0 win against Turkey.

France, England and Belgium were among the nations being mentioned as pre-tournament favourites, but their opening day win and another 3-0 victory in their second group game against Switzerland elevated their status to tournament contenders.

A 1-0 win against Wales saw them finish top of Group A with maximum points, seven goals scored and three clean sheets but, with France and Belgium among the other nations in the top half of the draw, Mancini’s side still weren’t seen by many football fans outside of Italy as favourites to reach the final.

England started Group D with a 1-0 win against Croatia thanks to Raheem Sterling’s goal and after a 0-0 draw against Scotland, Southgate’s side secured top spot in the group with Sterling on target again in another 1-0 win against Czech Republic.

Avoiding France, Belgium, Italy and Spain was a good route for England

Curiously, there was talk about an ‘easier’ last 16 game had England not won their group, as they would avoid France, Germany or Portugal in their next game.

But, with France, Belgium, Italy, Spain and Portugal all on the other side of the draw, winning the group gave England what looked like a less daunting run to the final if they could overcome Germany in the last 16.

Denmark thumped Wales 4-0 in the first of the last 16 games, with Italy needing extra-time to beat Austria 2-1.

England won their last 16 game against Germany 2-0 thanks to late goals from Sterling, his third of the tournament, and Kane’s first.

Italy beat Belgium 2-1 to book their place in the semi-finals, while Kane scored his second and third goals of the tournament as England outclassed Ukraine, with Harry Maguire and a first England goal for Jordan Henderson securing a 4-0 win.

Both semi-finals go to extra-time

Both semi-finals went to extra time, with Italy needing penalties to beat Spain. Italy and Spain failed with their first spot kicks, but former Chelsea striker Alvaro Morata’s miss gave Chelsea’s Champions League winning midfielder Jorginho the opportunity to send his side into the final with a cool finish.

One of the question marks before England’s semi-final against Denmark focused on how they would respond to adversity and they provided answers, after Denmark had taken a first half lead with the first goal England had conceded at Euro 2020.

England were level before half-time thanks to a Simon Kjaer own goal, with Harry Kane securing victory in extra-time as he slotted in a rebound after Kasper Schmeichel had saved his penalty.

BBC1 and ITV are both showing the final on Sunday. The BBC’s coverage starts at 6.20pm, while there’s a chance to see the Michael Caine film classic The Italian Job at 3.55pm on ITV, to get you in the mood for their coverage of the Wembley final, which begins at 6.30pm.

Aside from which channel is your preference, there is one final question to be answered on Sunday. Fifty five years after England’s one and only tournament triumph, is football finally coming home?